Former Lady Vols Chamique Holdsclaw and Brittany Jackson will host a two-day camp open to boys and girls from grades 2 - 9.
By Brittany Moore 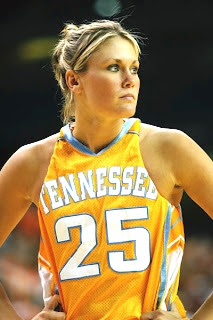 Two former Lady Vols basketball players, Chamique Holdsclaw and Brittany Jackson, team up to teach the game of basketball to Nashville area youth. In addition to improving overall skills, the primary focus will be to provide these boys and girls with a better knowledge of the game. The two-day camp will be held July 23 and 24 from 9:00am to 12:00pm at Beech High School in Hendersonville, TN. The registration fee is $75 which includes the skills training, special guest appearances, a t-shirt, autographs and a water bottle.

As their first camp in the Nashville area, Holdsclaw and Jackson are looking to make this camp a continuing tradition. “We love interacting with young kids and teaching them the skills of the game,” said Brittany Jackson. “Chamique and I know these kids look up to us and we think it’s important to be able to give back to them. We’re excited to teach the fundamentals of the game and good sportsmanship.”

The duo both enjoy giving back to the community as both are active with the Pat Summit Foundation. Jackson has done community outreach with the American Cancer Society, Knoxville’s Promise, Race for the Cure, and the Boys & Girls Club.

Jackson attended the University of Tennessee from 2001-2005 where she helped the Lady Vols reach the Final Four all four seasons and the National Championship game twice. Starting all four years, Jackson was named to the SEC All-Tournament team her senior year. After college, she played for the San Jose Spiders of the NWBL then moved to play in Europe (Turkey and Poland), and eventually got signed to the Atlanta Dream in 2008.

For more information about the camp, visit:  www.brittanyjacksonbball.com