The T.J. Martell Foundation to Name Rob Beckham as the 2014 Ambassador of the Year at Inaugural Event on May 12th

The T.J. Martell Foundation will celebrate the career achievements of entertainment executive Rob Beckham, Co-Head of William Morris Endeavor Entertainment’s Nashville office, with a “roast,” at its inaugural Ambassador of the Year event.  This celebration  is to be held at The Rosewall on May 12th at 6:00pm.

The T.J. Martell Foundation’s “Ambassador of the Year” event, recognizes an individual who has risen to the top of his field through commitment, dedication and perseverance.  This recognition is presented to a skilled and gifted professional who has earned the respect of seasoned industry veterans  and serves as a mentor to the next generation of rising young executives following in his footsteps.

“Rob Beckham is extremely generous and giving of his time,” says Tinti Moffat, Director of Strategic Development at the T.J. Martell Foundation.  “His unwavering commitment to both projects that are meaningful to him and to people he believes in, coupled with his willingness to invest in them, make him a most worthy recipient of this accolade.”

Rob Beckham is a Partner at WME, the world’s largest diversified talent agency and has spent nearly twenty-five years working in the entertainment industry.  Over the course of his career, he has played a part in the success of some of the best-known artists in country music.  His client roster includes Blake Shelton, Brad Paisley, Reba, Rascal Flatts, The Band Perry, Gary Allan, Chris Young, Easton Corbin and Jerrod Niemann among many others.  In addition to his work at WME, Beckham is also very involved in the Nashville community.  He currently serves on the Board of Directors for the Country Music Association, the T.J. Martell Foundation and Make-A-Wish for Middle Tennessee.

The 2014 Ambassador of the Year event is designed to connect young professionals with seasoned veterans during this VIP evening that includes a cocktail reception, buffet dinner and special presentation.   Beckham’s clients, colleagues and friends will come together on stage to pay homage to him by sharing colorful stories born from the miles logged together on the road.

“This is an unexpected and rather cool recognition,” said Rob Beckham.  “I’ve worked with so many amazing individuals in my career, on stage and off – from performers, to those that the T.J. Martell Foundation has reached.  If I’ve been able to make an impact in any their journeys, I can say it’s really been a privilege.  I’m looking forward hearing some stories from my friends and celebrating this honor together.” 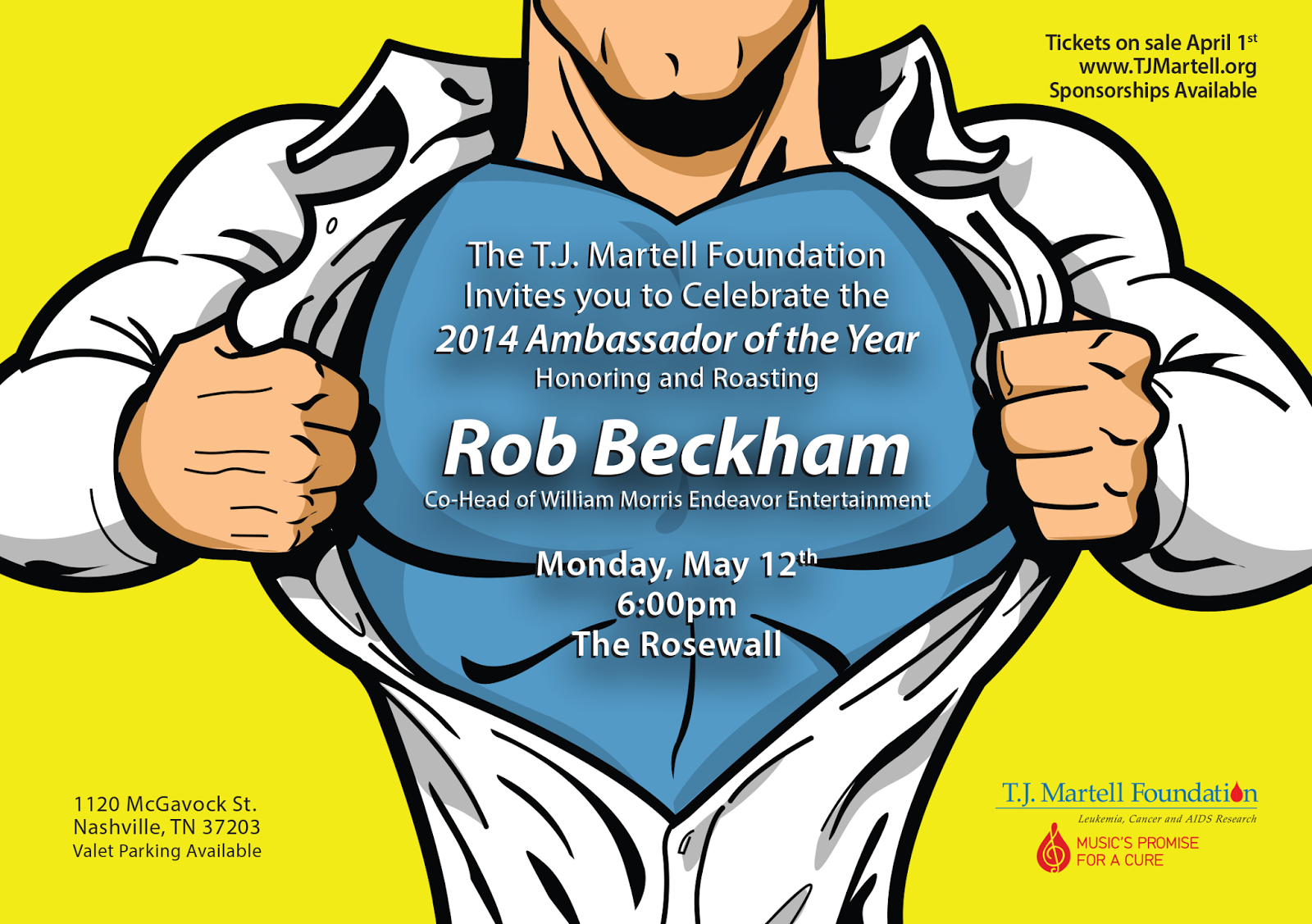 More About The T.J. Martell Foundation


The T.J. Martell Foundation, founded in 1975 by the music industry, is a national non-profit organization that funds cutting edge research for leukemia, cancer and AIDS at top hospitals nationwide.   Visit www.tjmartell.org for more information.