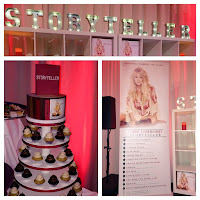 This October, LEGACY had the pleasure of collaborating with Sony Records to celebrate the launch of Carrie Underwood’s newest album,Storyteller at The Standard at the Smith House in downtown Nashville.  Producers, storytellers, executives and media were invited to experience the songs come to life with a uniquely themed event that the media later deemed as “brilliant.”

The LEGACY team constructed a true experience for five of the songs from the Storyteller album.  Each room of The Standard was inspired by a different track on Underwood’s album, and the songs played in their corresponding rooms.

As guests entered the venue, they were directed into the first experience and song of the party, “Dirty Laundry.” The bar served dirty martinis and the room was decorated with photos pinned on a clothesline that told the story of a woman in love left in the wake of her partner’s adultery.

Guests then spilled into the next area, the “Church Bells” room. Chairs were lined up in rows against the walls mimicking the look of church pews while still leaving plenty of room for mingling. A wedding dress was displayed at one end of the isle and champagne was served at the bar, completing the effect of a chapel wedding.  Then, a black ball gown was displayed on the opposite end of the isle completing the contrasting effect of a funeral. Highlighting the contrast of the two events told in the story of young woman marrying an older gentleman only to receive his money after his passing.  Sprinkled with diamonds and rose petals, the isle led into a room with appetizers and chocolate “Church Bells” cupcakes.

From “Church Bells,” the guests were transported to an outdoor scene filled with fireflies in mason jars, wildflowers and string lights.  Slowing the tempo down, “Heartbeat” told the story of a man and woman seeking a tranquil escape from the city life.  Guests enjoyed a spiked Arnold Palmer at the bar and found themselves escaping to the countryside. 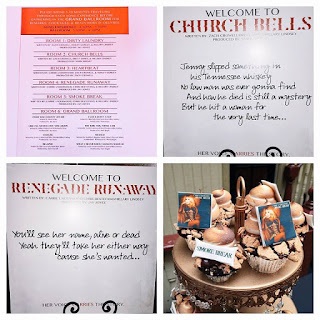 After leaving the outdoors, the guests stepped back in time into the “Renegade Runaway” room, styled to look like a Wild West saloon.  Complete with a bar, guests listened to the fast paced song with a Tequila Sunrise in hand.  Patrons were encouraged to go to the old West photo booth where they could dress up with goofy props and costumes and leave with their very own “WANTED” photo.

As if that wasn’t enough, invitees then entered the “Smoke Break” room in the outdoor courtyard.  After walking through the French glass doors, guests could smoke Debonair cigars from the Dominican Republic, sip brandy and mini espresso shots, nibble IveyCake’s custom made “Smoke Break” cupcakes in s’mores flavor and watch Carrie’s Smoke Break music video.

The remainder of the songs on the album were captured in the Grand Ballroom, where the song titles flashed on the large screens and were played overhead. The room was bathed in a red glow, sprinkled with candles and complete with elegant white furniture. Throughout the room, there were plenty of desserts, appetizers and Sparkling Cranberry Cocktails for guests to enjoy. Front and center of the ballroom was a stage with the album name “STORYTELLER” spelled out in lighted letters atop a white cubed bookcase displaying the album’s cover in a unique, art deco design.  Before the night concluded, Carrie walked up on stage and expressed her excitement for the album and shared her gratitude for those involved in making the album.  She thanked the media in attendance for their support of her music.  Underwood was grateful for such a unique event that showcased her songs and allowed them to truly come to life.
“This is really cool, and they did such a great job of putting everything together,” Carrie said from the stage of the Grand Ballroom. “I hope everyone was amused and entertained and had a really great night tonight.”

Storyteller debuted on October 23, and it became Carrie’s sixth album in a row to skyrocket to #1 on the country music charts.  LEGACY was honored to be produce this celebration for such an industry icon.