- December 15, 2017
Weaver to Sing the National Anthem at
Tropicana Field on December 21st 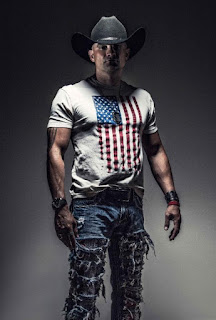 Sunday (12/17):  Ryan Weaver will join various celebrities for a special appearance at John Hopkins All Children's Hospital.
Monday (12/18):   Ryan Weaver will compete in the Bad Boy Mowers celebrity race event at Busch Gardens from 1:00pm to 2:00pm.
Tuesday (12/19):  Ryan Weaver will host and headline the Battle at the Beach event at Treasure Island from 1:00pm to 4:00pm.
Thursday (12/21):  Ryan Weaver will headline the Bad Boy Mowers Gasparilla Bowl Fan Invasion event at Ferg's Sports Bar & Grill from 4:00pm to 5:30pm before heading over to Tropicana Field to sing the National Anthem before the 8:00pm EST kick-off.
"I am so excited to be in my home state of Florida for the Bad Boy Mowers Gasparilla Bowl and to be headlining the various events," said Weaver.  "As a veteran, I'm honored to be singing the National Anthem for this game."
Weaver's personal story is like no other artist in country music today. The son of a Marine, Weaver is a former Black Hawk Aviator (helicopter pilot) who lost a brother and brother-in-law in service, making them a two-time Gold Star family.  He has turned his heartache into a burning passion to succeed as a music artist honoring his fallen brothers, all those who have sacrificed, and a country providing opportunities for everyone.
Weaver is the Patriotic Voice of the PBR (Professional Bull Riders) and recently debuted in the primetime performance slot at the PBR World Finals, the biggest global stage in professional bull riding, at T-Mobile Arena in Las Vegas, NV last month.  The PBR, a growing sport now available in more than 400 million homes worldwide, officially debuted Weaver and his new EP titled Celebrate America along with a touching patriotic video for his single "Never Forgotten."  The EP titled Celebrate America is now available on iTunes, Google and other platforms.
The inspirational video features Weaver family photos as well as NYPD Detective Rich Miller as he relays the behind-the-scenes story of how he helped raise the American flag amidst the rubble of the downed World Trade Center buildings.  Watch the "Never Forgotten" VIDEO.
Weaver is dedicating his 2018 PBR performances to his departed brothers, including songs like "Never Forgotten," a tribute to his brother, U.S. Army Chief Warrant Officer Aaron Weaver, who is now enshrined in the Infantry Hall of Fame along with his brother-in-law Randy Billings, one of four family Army Aviators.